You are here: Home > Our Organisation > Secretariat > Helen Johnston 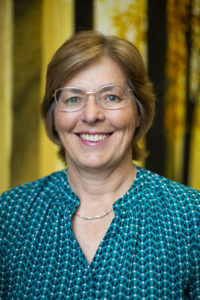 Dr. Helen Johnston joined NESC as a Senior Social Policy Analyst in July 2007. Since then she has worked on a range of issues including: well-being and social reporting; social regulation and standards; the social consequences of the 2008 economic crisis; social disadvantage; jobless households; and the future of the Irish social welfare system. Currently, Helen is leading a wide-ranging research project on Shared Island. A native of Northern Ireland, Helen has previous experience working in the Northern Ireland civil service. She was previously Director of the Combat Poverty Agency, and Chair of the Centre for Cross Border Studies.  Helen has qualifications in Environmental Science and Town and Country Planning, a Masters in Business Administration, and a Doctorate in Governance, where she examined the implementation of mental health policy in Ireland.

Hogan, M., Johnston, H., Broome, B. and Noone, C. (2015) ‘On the Design of National Wellbeing Measures and Policies’ in Celinski, M.J. (Ed.) Crisis and Renewal of Civilisations: The 21st Century Crisis of Ideas and Character. New York: Nova Science Publishers.

Johnston, H. (2014) ‘All Vision but no Change? Determinants of Implementation: The Case of Ireland and Mental Health Policy’. Dublin: Institute of Public Administration.

Johnston, H. (2009) ‘Well-being Matters in Measuring Social Progress’ in Reynolds, B. and Healy,
S. (Eds.) Beyond GDP: What is prosperity and how should it be measured? Dublin: Social Justice
Ireland.

You can find out more about which cookies we are using or switch them off in settings.

This website uses cookies so that we can provide you with the best user experience possible. Cookie information is stored in your browser and performs functions such as recognising you when you return to our website and helping our team to understand which sections of the website you find most interesting and useful.

Strictly Necessary Cookie should be enabled at all times so that we can save your preferences for cookie settings.

If you disable this cookie, we will not be able to save your preferences. This means that every time you visit this website you will need to enable or disable cookies again.

This website uses Google Analytics to collect anonymous information such as the number of visitors to the site, and the most popular pages.

Please enable Strictly Necessary Cookies first so that we can save your preferences!